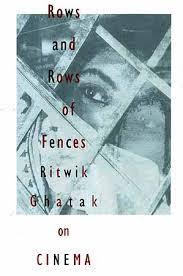 Published as an updated version of the compilation Cinema and I – a repository of essays, ancillary working notes, talking scripts, and interviews by Bengali filmmaker Ritwik Ghatak – Rows and Rows of Fences – Ritwik Ghatak on Cinema is an inspired, thoughtful, fascinating, articulate, and insightful collection of articles that at once, serve as impassioned (and often indicting) polemic, intelligent critical discourse, and perceptive observations on the role of cinema as medium for art and social outreach.

The process of attempting to distill Ghatak’s ideas into a few illuminating sentences has proven to be an impossible task. Ghatak was clearly an incisive and inciting activist and great communicator of ideas who had experienced first hand the traumatic disintegration of his beloved homeland and consequently, its rich culture, and who had also served as a passionately outspoken, but ultimately impotent and reluctant witness to the destructive impulses of the world around him. Irrespective of how he may have constructed the presentation of his logical arguments in order to suit his critical positions on diverse subject matter – from an analytical argument into the perceived inadequacies intrinsic in Siegfried Kracauer’s sociology-centered film theory, to the innate problems with Indian national cinema, to the creative and moral imperative of art and experimental filmmaking, to scattered, personal impressions of Luis Buñuel’s Nazarin, to his thoughts on how to sincerely (and unexploitedly) capture on film the human tragedy of the Vietnam War, to the evolution and role of documentary filmmaking, to the an analysis of the role of music in films, to his underlying narrative strategies for the idiosyncratic incorporation of sound in his films – his writing is always intelligently reasoned, perceptive, confident, seductively persuasive, and intellectually engaged (and engaging). So in deference to Ghatak’s superior grasp of language and ability to communicate ideas directly and lucidly, I am instead transcribing some of the presented ideas that truly impressed me. What is clearly evident in these words is a deeply sensitive human being who was equally prone to moments of unparalleled brilliance as he was to horrible lapses of self-destruction: an artist and cultivated thinker so idealistic, passionate, and profoundly humanist that he felt deeply – and consequently, suffered greatly – for the profound rapture and burden of existence in this complex, often terrible, and terrifyingly uncertain world.

In the essay, Film and I, Ghatak lucidly reflects on the perverted meaning of art in the medium of contemporary cinema:

The word ‘art’ in films is much abused, both by its friends and its foes… whatever is pretentiously dull or breathtakingly spectacular is not necessarily art. Art does not consist merely of ambitious subjects or outlandish propositions or extensive use of a newly available extreme wide-angle lens. It does not consist of montage and manipulation of filmic time and de-dramatization solely. Rather, it consists of bursts of fancy. Whatever the genre, art brings with it the feeling of being in the presence of living truth, always coupled with enjoyment.

A terse passage in the article, Cinema and the Subjective Factor, channels a similar sentiment of cryptic enlightenment in the fragmented passages of Robert Bresson’s Notes on the Cinematographer with the abstract comment:

All art, in the last analysis, is poetry. Poetry is the archetype of all creativity. Cinema at its best turns into poetry… In art, all that is subjective turns poetic. And cinema, sometimes, seems to be an art.

In the essay entitled My Films, Ghatak elegantly and poignantly articulates the pervasive sense of desperate urgency – the liminal, but omnipresent raison d’être – that invariably propels his impassioned, but deeply haunted and intrinsically personal body of work:

We were born into a critical age. In our boyhood we have seen a Bengal, whole and glorious. Rabindranath, with his towering genius, was at the height of his literary creativity, while Bengali literature was experiencing a fresh blossoming with the works of the Kallol group, and the national movement had spread wide and deep into schools and colleges and the spirit of the youth. Rural Bengal, still reveling in its fairy tales, panchalis, and its thirteen festivals in twelve months, throbbed with the hope of a new spurt of life. This was the world that was shattered by the War, the Famine, and when the Congress and the Muslim League brought disaster to the country and tore it into two to snatch for it a fragmented independence. Communal riots engulfed the country. The waters of the Ganga and the Padma flowed crimson with the blood of warring brothers. All this was part of the experience that happened around us. Our dreams faded away. We crashed on our faces, clinging to a crumbling Bengal, divested of all its glory. What a Bengal remained, with poverty and immorality as our daily companions, with blackmarketeers and dishonest politicians ruling the roost, and men doomed to horror and misery!

I have not been able to break loose from this theme in all the films that I have made recently. What I have found most urgent is to present to the public eye the crumbling appearance of a divided Bengal to awaken the Bengalis to an awareness of their state and a concern for their past and future. As an artist, I have tried to remain honest, and it is for the future to decide how far I have succeeded.