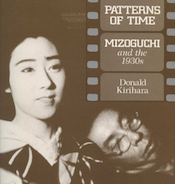 In the book Patterns of Time: Mizoguchi and the 1930s, Donald Kirihara recounts a legendary episode at the Venice Film Festival that sets the tone for Kenji Mizoguchi’s unique and unforgettable films:

When in Venice in 1963 for the festival screening of Ugetsu, he spoke of the film as a representative of Japan’s aesthetic tradition. To underline that, he and star Kinuyo Tanaka wore traditional kimono to the film’s premiere.

What is revealed through these memorable, fragmented images of the enigmatic Mizoguchi is an artist of singular focus, profound social conscience, unsentimental vision (Masahiro Shinoda describes Mizoguchi’s camera as “an unhurried gaze”), fickle studio allegiance, deep reverence to cultural tradition, and a staggeringly prolific body of work (rivaling even the output of Rainer Werner Fassbinder).

Mizoguchi’s technique continued to evolve throughout his career, producing an estimated 85 films from 1922 to his untimely death from cancer in 1956. Kirihara focuses his in-depth analysis on Mizoguchi’s films from the 1930s, a turbulent decade marked by profound social and political change, and demarcates the turning point of Mizoguchi’s “mature style”: The Downfall of Osen, Naniwa Elegy, Sisters of the Gion, and The Story of the Last Chrysanthemum.

In defining an external frame of reference, Kirihara cites several catalysts for the evolution of Mizoguchi’s work. The increasing westernization of Japan and the popularity of Hollywood films compelled Japanese filmmakers to adapt, if not imitate, the structure and feel of western films. Mizoguchi, in turn, decided to incorporate some of the techniques of western films, such as montage and extended, fluid camera movement, but retained the familiarity of traditional settings and customs. As Japan became increasingly isolationist in the years preceding World War II, censorship guidelines for the motion pictures were enacted and the exhibition of western films were largely suppressed. Mizoguchi was again compelled to adapt in order to survive both creatively and financially, but continued to subvert the ambiguity of the regulations to create films that, despite their historical settings, provided an accurate and socially relevant glimpse of contemporary Japan.

Observations: Although Kirihara provides a comprehensive portrait of Mizoguchi’s chaotic environment during his pivotal creative transition, the author does not provide a historical biography of the inscrutable filmmaker. Mizoguchi was born into a working class family, the son of a carpenter. When Mizoguchi’s mother died at an early age, his father, unable to care for their two children, sold his sister to a geisha house. When Mizoguchi’s father passed away, it was his sister who supported him through school. It is this ambivalent relationship of coddled indulgence and self-sacrificing devotion between the two siblings that is reflected in Mizoguchi’s complex portrayal of women that underlies the bittersweet and often tragic endings of his intensely personal films.