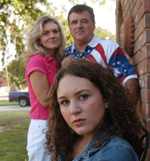 In an incisive encounter in The Education of Shelby Knox, (then) high-school student Shelby from Lubbock – a devout, abstinent, southern Baptist, child of conservative Republicans, and fierce advocate for comprehensive sex education in the classroom as a means of curtailing teenage pregnancy and sexually transmitted diseases, stemming off widespread health misinformation, and promoting important life (and life-saving) skills – turns to her charismatic, spiky-haired youth pastor, Ed Ainsworth for advice in a moment of spiritual crisis. Recognizing the inherent failure of the George W. Bush-backed, faith-based initiative, “abstinence only” program that teaches only marital relations and fails to address the concerns of – and effectively excludes – the gay population who cannot marry, young Shelby (an amusingly typical, hyper-romantic teenager who still envisions the man of her dreams in grandiose, operatic gestures as someone who could play the role of the Phantom to her Christine in The Phantom of the Opera) has become an unlikely ally in the school’s gay student movement towards equal rights and representation. Struggling to reconcile her religious beliefs with social reality and her innate compassion for the marginalized, she muses that “God could not have made all these people just so He could send them to Hell.” Nodding with the (apparent) gesture of an understanding heart, Ainsworth then embarks on a bafflingly open-ended (if not condescending), veiled allusion to Shelby’s “questionable” faith by remarking that Christians have had a traditionally long history of intolerance and that, when he listens to her articulate her inner turmoil, what he is hearing from her is “tolerance” (and yes, the audience let out a collective sigh upon hearing this comment). Remarkably capturing Shelby’s infectious effervescence, fearlessness, sense of egalitarian justice, and unwavering integrity of faith, filmmakers Marion Lipschutz and Rose Rosenblatt have created a whimsical, yet potent, inspiring, and affirming portrait of the true meaning of moral activism and spiritual service.