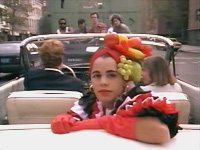 A middle-age documentary filmmaker named Yvonne Washington (Novella Nelson) invites a long-time friend and former dancer, Jenny (Alice Spivak), ostensibly to film a candid and open dialogue on the subject of menopause. As the interview begins, Jenny makes a cursory remark on the effectiveness of an activist, Helen Caldicott’s (Yvonne Rainer) heavy-handed, incendiary speech on marginalization, disenfranchisement, and the complicitous role of women in their own relegated secondary status in society: a scathing argument that she vividly illustrates by her grotesque, exaggerated application of cosmetics prior to the public broadcast. It is this brief commentary on the implicit interrelation between vanity and subjugation that invariably propels the trajectory of the interview as well, as Jenny – reluctant to discuss the details of her passage into the euphemistic categorization as a “woman of a certain age” (perhaps in denial) beyond the outright disapproval of historically insensitive, off-handed descriptions of the biological process (particularly from people within the scientific and medical community) as “women’s partial death” or “living decay” – seizes an opportunity to derail the conversation when Yvonne asks her to recount any episode from her past when she still felt desired. Initially painting a vibrant picture of a diverse and multicultural working class neighborhood that she had moved into as a struggling young dancer (where she invariably caught everyone’s attention as she walked down the street), Jenny begins to reveal witnessing repeated incidents of seeming domestic abuse between her constantly fighting neighbors, Carlos (Rico Elias) and Digna (Gabriella Farrar) that resulted in Digna’s institutionalization at Bellevue Hospital, and Carlos’ attempted seduction of another neighbor, an emotionally unavailable nurse whom – unable to remember her name – Jenny refers to as “Brenda” (Blaire Baron) that escalates into assault.

Privilege is an intelligently conceived, boldly anarchic, and wickedly insightful exposition on the culturally ingrained and socially divisive malaise of -isms that artificially define and characterize empowerment in contemporary society: ageism, sexism, economic elitism, and racism. Yvonne Rainer conveys texture through the intercutting of archival footage, video, and film – as well as compositional layering through the film-within-a-film structure, elliptical (and self-referential) fusion of past and present, and the filmmaker’s idiosyncratic penchant for superimposed typed text (a familiar sight in Rainer’s oeuvre that is still evident in her recent short video work, After Many a Summer Dies the Swan: Hybrid) – and multilingual polyphony (note the prefiguring appearance of a sign language interpreter during Caldicott’s speech) in order to reflect the film’s theme of multifaceted social segregation that pervades everyday existence. Rainer captures the self-perpetuating cycle of subliminal class divisions that fosters a tolerated and unchallenged atmosphere of prejudice, stereotyping, and exclusion, even among the self-characterized discriminated minority (as some, nevertheless, virtuously contend to have an egalitarian acceptance of such superficial differences) through wry, yet perceptive inner monologues and fourth wall direct address, most notably, in Digna’s indelible manifestation in Jenny’s subconscious as she conveys her determination to overcome her perceived trivialization – if not erasure – from Jenny’s fallible memory: her appearance irreverently and incisively (and poignantly) reduced to society’s caricatured, iconic pop culture image of the Hispanic woman: Carmen Miranda. By presenting a deceptively organic and whimsical, yet acutely relevant portrait of a seemingly mundane – and little discussed – subject on the experience of aging (and implicitly, the resulting emotional toll of a woman’s perceived loss of sexual appeal), Rainer creates a powerful and incisive deconstruction on the nature, elusiveness, and myth of privilege.